Its Cloud Service, Not Oracle 18c RDBMS which is Self-Driving and Autonomous

Look at the following picture displayed at Oracle's official website here, and you would forgive anyone who would naively believe that the Oracle 18c is a self-driving, autonomous database. 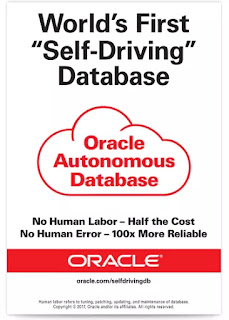 Now, in above mentioned article after reading the title and the first paragraph, one still maintains the notion that Oracle 18c is autonomous and self-driving database. Its only after reading second paragraph carefully, one should understand the true picture.

The second paragraph in that article clearly says that self-driving and autonomous is Oracle Autonomous Database Cloud  powered by Oracle 18c database and not the Oracle database 18c itself.

So this autonomy is about cloud service and not about the RDBMS. This cloud service could very well run on Oracle 12c and say the same or any other version for that matter. DBA's role in such managed database cloud services is still nominal. So if its not on the cloud then DBA's role is more challenging then before as every new version is packed with new features.
Written by Fahd Mirza

It's All About Passion

The postings on this site are solely my own and don't represent my employer or clients in any way.